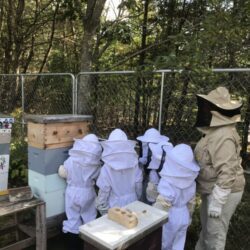 Georgetown kindergartners learn about bees by raising them

It's never too early to get some firsthand knowledge of species and food systems.

The sweet buzz you get from helping 5-year-old children suit up so they can safely visit the beehives they keep in the school yard sticks to your brain like honey in the comb.

Six, right-sized, head-to-toe beekeeping suits are laid out on the alphabet area rug that anchors Laurie Martin’s kindergarten classroom. Three years ago, Martin, with the help of Waldo County Beekeepers member Doug Calhoun, won a $1,500 grant to buy the gear and the hives of honeybees now safely housed in a padlocked, chain-link, fenced-in area behind the school. The honeybees live just a short flight away from an apple tree, heavy with fruit they helped set. The bees represent a life lesson for these kids: be prepared to help the bees sustain your local food system.

Agar, which you can buy in either powder or flake forms in health food and Asian specialty food stores, is a gelling agent. You use it the same way you would gelatin: Dissolve and hydrate the agar in warm liquid and let set. If a recipe calls for 1 tablespoon gelatin, use 1 1/2 teaspoons agar. And it’s important that you whisk agar vigorously into the liquid you’re trying to gel in order to achieve a consistent gel throughout. Unlike gelatin, agar is okay for vegetarians (and vegans). – CHRISTINE BURNS RUDALEVIGE

“First you take off your shoes, so they don’t get stuck in the pants part,” says Nerissa Gehan, also explaining that since she’s a beekeeper in real life, she’s going to be a fairy for Halloween.

Putting on beekeeping paraphernalia is like getting into a pearly white cotton snowsuit. One that also sports a garden-party hat and a veil. Legs in first, arms in second, hood on last. The netting that flows over the hat’s wide brim is zipped into place and sealed with Velcro flaps so no bees can slip inside. Matching gloves extend to the children’s armpits and are secured with an elastic cuff. They’re bulky, but the kids don’t mind because the soft rubber palms make an awesome sound when high-fiving classmates.

“Don’t forget your boots!! Where are my boots?” asks Aiden, who declined to give his last name because he’s shy. He’d not worn his boots last week while tending the bees and became the first child stung since the school’s Bee Project began in spring 2017, says Martin.

“Bee stings definitely hurt,” said Vicki Smith, a Portland beekeeper and children’s book editor during the short talk on “Raising Bee-Friendly Children” she gave as part of The B Side, a TED Talk-like event held recently at the Portland House of Music. Sponsored by the Honey Exchange, a bee education outfit and store on Stevens Avenue, The B Side featured nine speakers. That is also where I heard Martin talk about the young beekeepers she’s fostering.

“And while you must acknowledge that to any child,” Smith said, “the pain will eventually pass.” Helping children understand that staves off a bee-frenzied mindset that leads them as adults to call an exterminator. “Bee-phobic kids grow up to be bee-ignorant adults,” Smith said. “Don’t bother the bees and they won’t bother you” is age-old advice that still holds true.

To open an engaging dialogue with kids about the power of pollinators, avoid starting with colony collapse disorder, Smith said, as doom and gloom makes kids feel powerless. Rather, begin with a chart that shows all the different kinds of bees that exist. Anyone who has had a child who memorized dinosaur names understands the draw. Then move onto books that explain the power of bee’s bodies to make wax and honey. Bodily functions fascinate kids. And take every opportunity to point out a bee buzzing near a flower as a way to walk a child through the process helps secure her future supply of food. If you can, find a beekeeper willing to provide a hands-on experience with the inner workings of a hive.

To date, Georgetown Central School’s Bee Club has self-published three books on bees. And the bees have produced 160 pounds of honey. The honey, packaged in small jars, sells out in hours. Proceeds from all sales go back into supporting the bees.

In return, says Martin, the children have learned lessons “in overcoming fear, in having patience for a process, in taking responsibility for other living things and in loving something real.”

CHRISTINE BURNS RUDALEVIGE is a food writer, recipe developer and tester and cooking teacher in Brunswick, and the author of “Green Plate Special,” a cookbook from Islandport based on these columns. She can be contacted at cburns1227@gmail.com.

Here, the honey pearls have been strained from the oil. Derek Davis/Staff Photographer

While grounded in the fussy world of molecular gastronomy, this easy, fun project of mixing honey with agar – a seaweed derivative that works like gelatin – gives kids an opportunity to look at honey in a whole new light. Local honey is always best. Serve the pearls with goat cheese or atop peanut butter and bread.